Arse From the Past

Grizzled online veterans might recall the name Seth Freedman, a former stockbroker and volunteer with the Israeli army who subsequently grifted as Comment Is Free’s resident ‘critical friend’ of Israel.

During Israel’s 2008-9 terror assault on Gaza, Freedman abandoned his ‘progressive’ posture as he used the Guardian website to defend the massacre—‘I struggle to see what [other] option Israel’s leaders had’—and smear its critics. He later issued a brief and disingenuous note of ‘contrit[ion]’ for these apologetics, but no lasting lesson was learned: when Israeli commandos killed nine peace activists aboard the Mavi Marmara in 2010, Freedman again argued that Israel’s ‘boarding soldiers’ had ‘no choice’ but to resort to lethal force as—albeit only in his imagination—they came under ‘vicious assault’ from ‘ultra-violent’, ‘[c]lub-wielding’ ‘activist aggressors’.

Fast-forward a decade and it turns out that once an arsehole, always an arsehole:

Freedman’s biggest con-job was on the prominent Weinstein accuser Rose McGowan. . . [He] lured McGowan into revealing her plans for a lawsuit against Weinstein. . .

Freedman, never known to pass up an opportunity to write about himself, published a shameless brag-cum-confession in the Sunday Times (5.1.20):

I don’t mind calling myself a spy. . . I was paid to pry – and paid top dollar at that. . . My colleagues and I gathered huge amounts of intelligence for Weinstein. . . From my vantage point, it was a simple equation: client X wants to know what target Y is doing. The identities of X and Y are immaterial, just as a surgeon performing a heart transplant never needs to look at the patient from the neck up. . . As a profession, [private intelligence]. . . doesn’t judge, it doesn’t sermonise: it just gets on with the task at hand. I stand or fall on whether I did a good job, not whom I did it for. Regrets, I have a few, but not for being part of the Weinstein project.

I was just doing my job—corruption compounded by cliché. It seems defending the indefensible is a transferable skill.

p.s. In Freedman’s 2012 novel based on (who else?) himself, ‘the Freedman character is planted at the Guardian by the Mossad, which wants to exploit his press credentials to spy on the Palestinian resistance‘. Black Cube is a private intelligence firm but has close links to the Mossad.

p.p.s. When Observer journalist Carole Cadwalladr, who has investigated Russian intervention in British politics, wondered on Twitter whether Israeli intelligence had been active in the UK, Freedman reportedly sent her the following message via Whatsapp: 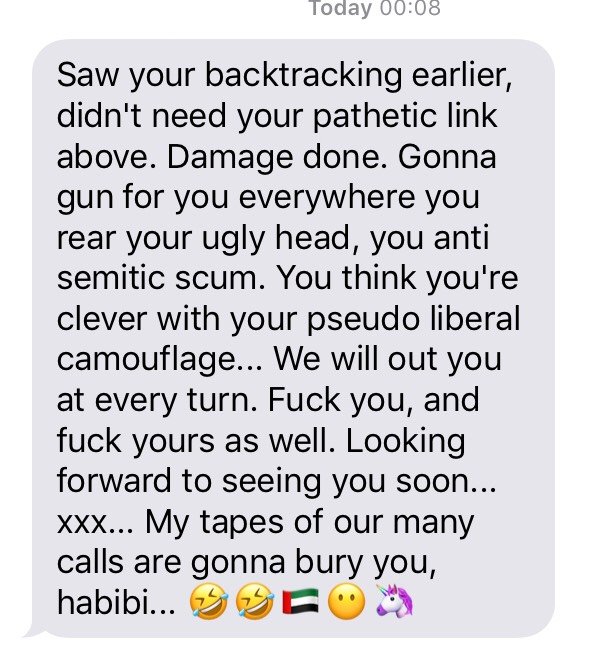